Rounding The Cape of Good Hope 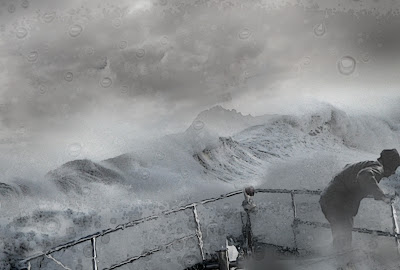 Heading back to the States now. This weekend, while all of you landlubbers were watching football we were rounding The Cape of Good Hope in some fairly rough seas. Most of us are accustomed to this type of thing but there are those among us (cough...cough...Powell) who are a little "sensitive. You know these artistic types. I caught this flattering photo of him feeding the fish. He was out there for a good 15 minutes and I had to send Dafari out to tie him to the deck. I didn't want him in the drink or I'd have to send one of those damn Hansen brothers out to get him. A Hansen brother I could lose...Powell is one of a kind.


If you look closely you can see the cape in the background. After we'd all had a hearty breakfast of Octopus sausage and Albatross eggs, Cookie was preparing crab cakes for dinner and the scent was wafting through the ship as the Hansen brothers played poker and smoked cigars in the Mess hall. I don't know what sets Powell off sometimes. He's got the stomach of a little girl. 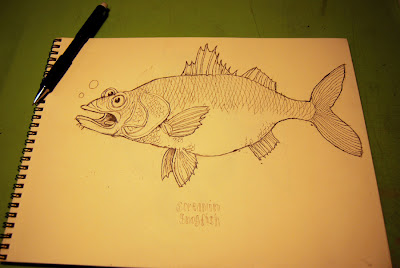 Usually, it's pretty smooth sailing aboard the Frankie Anne III and while us manly types are on deck doing all sorts of manly things (Veronica may be the most "manly" of all of us to tell the truth) Powell is usually down below drawing away in his cabin. Using a combination of photos provided by Petrus and his own memory , he begins with a series of rough sketches in his books, eventually working towards a finished "portrait". I snapped a couple photos of the Snogfish as he was working on it last year. Here's the finished sketch:

Don't ask me why, but he works in watercolors which is a stupid idea in my opinion, seeing as we're aboard a SHIP . I don't know how many times I've heard his screams when one of his paintings gets wet and ruins the damn thing. Go figure...Water? On a boat??? Anyway, he starts all over again and isn't satisfied until he's got it right (which is good, seeing as I'm paying him). Here's the painting of the Snogfish" 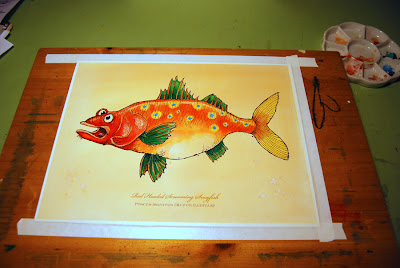 When he's done with one of these beauties, it goes to our land crew and our archivist, Professor Thorstenson (a distant relative of Thor Heyerdahl himself!) files the original away and sets to work getting it ready for print for our shirts and other outdoor gear. Did I mention you can buy gear from our store ? Please do! It's for a worthy cause. Building the upcoming Gill McFinn Museum is an expensive task and let me tell you, gas for this boat ain't cheap either!! Creating our shirts and other gear is a lengthy process but it's worth it, you folks deserve the best and the Gill McFinn crew doesn't cut any corners !

So, now we're heading towards the gulf coast and hope to be in Louisiana after all the Superbowl fans have cleared out. We'll stop in at Pat O'brien's and have a couple Hurricanes at before we outfit ourselves for a trip into the bush in search of the rarely seen North American Candy-Striped Boar!

Until then!
Posted by Unknown at 6:10 AM