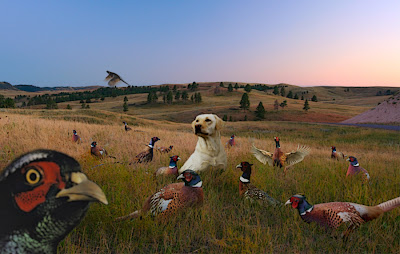 What is a ship without a dog? Not much, in my opinion. My grandfather had a fantastic dog named Gigi who was famous for her ability to spot fish deep below the surface. That dog could hold her breath for a good five minutes as she chased after those fish, she was tenacious. Oh, she wouldn't just leap into the water on a whim, my grandfather would never have put up with that. No, ol' Gigi would quietly sit beside my grandfather and gaze down at those fish as he was casting his line, still as a statue, the picture of patience. After all, you don't want your dog jumping in the drink just as that fish you've been chasing is about to finally go for the bait. Nope, Gigi would wait for the magical words "Git it!" from Pop, then she'd be after that fish faster than you could spit! 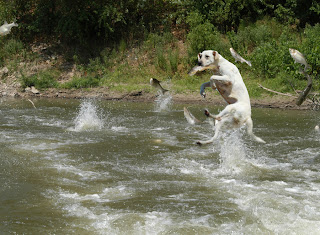 I'm proud to say I've got a similar mutt aboard the Frankie Anne III: Shep.

Now, Shep is as good a fishing and hunting dog as Gigi was...he just doesn't quite have the finesse that Gigi had. He lacks a little class I guess you'd say. Where Gigi would sit still as a statue, Shep tends to quake a little, shivering with excitement, barely keeping down the urge to get after whatever needs to be got. We were in South Dakota a couple years ago in the Valley of a Thousand Pheasants (beautiful spot) and I thought I'd tease old Shep a bit. We blindfolded the poor guy and led him out into the grass and told him to "Stay!". Then we whipped off the poor guy's blindfold. There poor Shep sat, surrounded by those pheasants, about to bust. He was staring right at me, waiting for me to let him at 'em. Petrus got a pretty good shot of it. When I spoke the words, there was only nine hundred and ninety-nine pheasants in that valley left.

As far as fishing goes, Shep is a "Hit 'em Hard" type of guy. He'll wait for my command just fine but as soon as he get's the go-ahead, he's after them like a bull in a china shop. He never misses though, not once.

You gotta love a ship's dog. Here's to Shep!
Posted by Unknown at 9:00 AM No comments:

So, a couple years ago we were in the great North Woods of Minnesota looking for a strange critter called the Red-Bearded Spotted Moose. They're getting pretty rare. This isn't surprising because they're not a species greatly adapted to the presence of Man. Here's how the story goes: 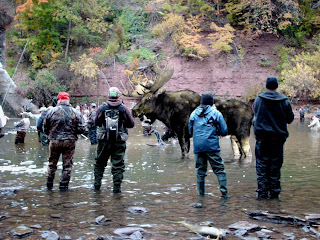 "In the woods of Northern Minnesota roams a most unusual beast. A giant in both size and intellect is the Red-Bearded Spotted Moose, the scholar of the forest. Nothing gets past the Spotted Moose’s keen eye for inspection; its thirst for knowledge of its surroundings seems unquenchable. This has been, unfortunately, the downfall of the great beast. When the Red Beard spots something of interest, no matter how small, the giant is entirely captivated and may stand still for hours as it contemplates the thing. This has made it easy prey for hunters over the years who will often walk directly up to the animal and shoot it, point-blank."

You can see why these gentle giants are getting scarce. Some butt-headed hunter's with a chip on their shoulder simply walk up to them and "pop a cap" in them. Tough guys. Sheesh. Well, we set out for the woods with plenty of fishing gear and other essentials. Powell, of course brought his sketchbook , plenty of gear and his wise-ass sense of humor. Runt carried most of the gear, we gave him jerky now and then, that kept him plenty happy. It wasn't long before we were rewarded. Just up the trail from the parking area near a well-loved fishing spot we stumbled upon our first Red-Beard, standing among a group of fishermen working in pretty tight quarters, oblivious to the whole thing. It stood there staring at a beetle or something that had landed on it's schnozola. 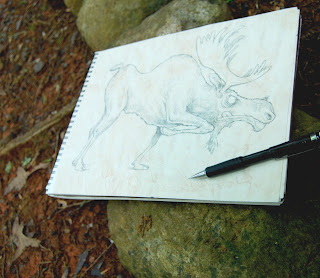 The fishermen seemed like it was nothing. They were too busy complaining about how crowded the fishing spot was "And now, we got this danged Moose fella here that we gotta work around, you know?" said one guy I asked "They're always gettin in the way. It's bad enough we got all these other yahoos up here, eh?" he continued in his thick Minnesotan accent. We got a good photo but Powell wanted something a little more private in which to work. There was too much complaining going on here, so we set off.

We made camp about two miles in and Powell and I set out to the surrounding woods.It wasn't a bad day, we were in shirtsleeves and vests; a nice day for a hike. Powell had stashed a couple of beers in his vest and we'd left Runt behind at the campsite with a jar of peanut butter (he's crazy for the stuff) so we were basically strolling through the woods trading stories of other adventures we'd been on, telling jokes when we rounded the corner and found this armature Lepidopterist, intent on identifying whatever species of butterfly had lit onto his sniffer. He had no idea we were there! 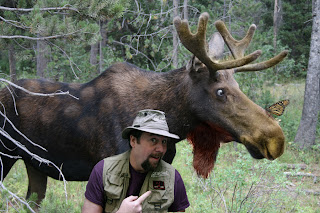 Well, we settled down, cracked a beer and told some more stories as Powell sketched away. Not a bad way to make a living, if you ask me. Afterwards it was back to camp where Runt had cleaned out everything that wasn't in cans. He still hasn't figured out how to open those.

Happy Travels!....And hey, if you ever come across one of these amazing monsters out there while you're hunting, go pick on someone with your own dumb intellect, butt-head!
Posted by Unknown at 8:27 AM 1 comment:

The Legend of the Little Bully

Little Scotty Multer, a crewmember on a B29 Super Fortress during World War 2 was a guy who liked to kid around. He was always pulling pranks on the other members of the crew, pretending that the bomb-bay doors were jammed followed by a cherry bomb..that sort of stuff.

He wasn't well liked among his fellow crew members at first but along with his shenanigans Multer also proved to be a problem solver. He was always coming up with a new gadget to help make some task less tedious or something of that nature. So, in time, the crew warmed up top the sawed-off silly s.o.b. and they began to hang out together. Multer was an avid fisherman and never failed to find a moment to cast a line during liberty. He wasn't the best fisherman but he was enthusiastic, never catching much but never giving up. It would drive him crazy how the damned fish were so wily, always just out of reach, He used to say, "These damned fish are like the damned Japs! You go after one and another one pops up in his place!" He could be an angry little man. 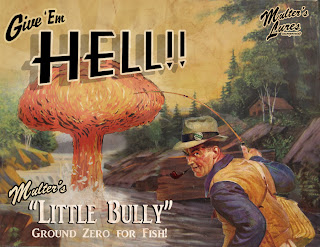 As the war continued and he flew more missions, Multer was beginning to feel his luck wearing out. He was haunted by the thought of being shot down and the runs to Tokyo were hair-raising and dangerous missions to say the least. You can imagine the relief when the war came to a screeching halt after the United States pulled out the Atom Bomb. The Little Boy and the Fat Man were dropped and the missions were ended. Multer went home to his fiancé, Bridget and began raising his family. He had no idea that the events in Nagasaki and Hiroshima would not only have saved his life but would also make him a very rich man as well. 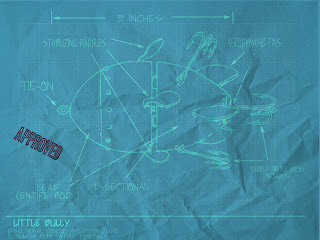 You see, avid gadget-maker that he was, Multer used the example of the Atom Bomb to make himself a lure to fight those wily fish that he'd been after for so long. He got himself some lead and some hooks and fashioned the now infamous "Little Bully" into a lure that would change the face of fishing in postwar America. No longer did a fisherman need skill and technique to snag a trophy bass or trout, he could use brute force! If you had a strong enough pole, you could launch one of these babies into a serene lake and you'd be sure to either hook a fish or knock one out. The brightly painted grenades were flying like tree-rats above lakes the country over and Multer had a foothold in the lure business.

The returning veterans were having a ball bombing the bass and downing beer. Life was good in America again. Eventually, though.. the lures became less popular among aficionados of the angling persuasion and the brute force that was a release to the returning vets gave way to subtlety and technique once again. Every once in a while though, you'll run across someone who's got a Little Bully hiding in their tackle-box and LOOK OUT!!
Posted by Unknown at 12:20 PM 4 comments: