Trouble in Paradise (A Minor Setback)


We made landfall in New Orleans yesterday evening after a smooth trip into the gulf (got me that Sea Bass I was looking for with Dafari's grub!) aboard the Frankie Anne III. The crew were itching to hit the town and spent the latter part of the day scrubbing their faces and washing their skivvies. Mom was scowling at every one of them. She knew, as all mothers have some sort of weird-o sixth sense, that trouble was brewing. New Orleans is an easy place to find trouble.

Everyone of us has our favorite watering hole in each port. In The Big Easy, I like to go hear some jazz over at Nina's, the Hansen Brothers go for O'Brien's and drink those huge hurricanes, eventually throwing up in the fountain. God knows where Petrus goes, I don't ask! Cookie, he likes Big Benny's on the waterfront. I've been there a time or two with him and, if you ask me, he's sweet on Benny. She's about three biscuits over 275 and stands a good foot taller than ol' Cookie but he likes 'em big and that's okay with me. Whatever floats your boat is what I always say. I imagine that's how he got to be such a good cook, fattening up his broads. Well, Benny isn't a slouch in the kitchen either and she's actually a little famous for her fried oysters and a few other eats she serves up at her joint. The problem with their "romance" is just that: food. Both Cookie and Benny have a pretty high opinion of their skills as culinary commandos and when they get to talking grub, things can get ugly. Uglier than both Cookie and Benny put together.

So, after we set anchor we all jumped in the skiff and headed to town. We dropped Cookie off first and pulled around to a dock, tied up and went our merry ways. It was a beautiful evening and the smell of beignets  was wafting from the French Quarter as I made my way down to Nina's. Just for the hell of it, I dropped into O'Brien's and had a (small) hurricane with those troublemakers to show them I had no hard feelings after chewing their asses out yesterday for flooding the hold again. After that, I was on my own. Good to get away from each other every now and then, that's for sure.

Well let me tell you "Bones" Mahoney was on fire that night. I could hear him tickling those keys from half a block away and the sound washed over me like a warm Hawaiian wave as I walked in. He had Jack "Heavy" Jerkins on the tenor sax playing along and they were bouncing riffs off of one another like those chicks at Wimbledon last year. It was fantastic...'round midnight when Powell pops his head in and tells me we had a rescue mission to run. 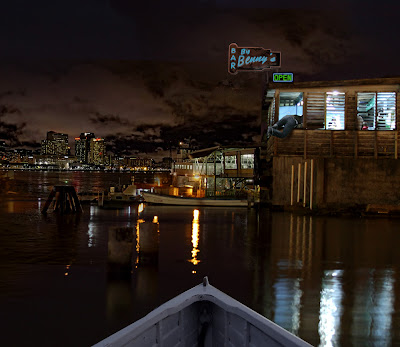 Apparently, he'd had a hankering for some of Benny's Oysters and hung with Cookie for the evening. I guess they were having a pretty good time and Cookie and Benny were getting pretty touchy-feely (sorry Powell had to see that) until something about food came up. I don't know exactly what was said but Benny didn't like it. I guess things heated up pretty fast because Powell had to tell me all of this at a run as we high-tailed it for the skiff. I guess Cookie had locked himself in the head (that's bathroom for all you landlubbers) and Benny was pounding on the door with her butcher's knife. Problem was, the only way out of the head was through a window out back, over the water.

I took this photo as we pulled up to save Cookie's skin. Love is a fragile thing!
Posted by Unknown at 6:25 AM