Last Friday night I thought try out this new bar I'd heard about off of Pirate Alley. They had Absinthe there and I'd had a bad day and figured I needed to see things from a "different perspective". So. I dropped in and had a few. At about 11 o'clock. in walks this 7 foot tall black dude wearing a top hat and a ratty overcoat. He had huge, yellow eyes that wandered to and fro as if they had a mind of their own, sweeping the room constantly. Of course, he sits down right next to me. Well, we got to talking (this is sort of a stretch, he seemed to be in a trance) and of course the conversation turned towards fishing. I thought I'd throw out the old line and see if he new of any interesting spots I might want to check out. I mean, the guy didn't look like much of an outdoorsman but, hell, you never know. Damned if he didn't sit straight up in his chair and start reciting this "legend" to me, his eyes, now steely still, gazed into my very soul as he spoke:

"Outside of New Orleans in an undisclosed swamp near Lake Pontchartrain there lies a pool surrounded by cypress and draped with Spanish moss. Dark, dank and stinking, buzzing with flies it lies in constant shadow, it's surface still. But if one looks closely, underneath the oily surface of the water ...something moves. At first you see their eyes, ghostly white and then, perhaps their teeth. Woe to the occasional ignorant raccoon who stops by this pool for a drink or to wash its paws. The bottom of this pool is said to be littered with the bones of many beasts. And men. Legend has it that a Creole fisherman sold a bad bass to the great Marie Laveu at the local fish market causing her to spend Fat Tuesday locked in her outhouse. When she'd recovered, the voodoo priestess Laveu put a curse on that fisherman's favorite spot for eternity and now the Largemouth Zombie Bass forever lurk beneath it's waters."


When he stopped, the bar was silent. Everyone was staring at this guy with a look of sheer terror in their eyes as he stood up and walked out the door. In a moment, the music picked up, folks shook themselves out of their stupor and the place was filled with conversation once again. I was just finishing my drink when this fella comes up to me and says "I know where that place is and I can take you there, but it's gonna cost you, big time". I was hooked.

The next day, we picked this guy up over off of Tchoupitoulas Street and we headed for Pontchartrain. The guy's name was Stewie Prima and, by the look of his gear he looked like he knew his way around a lake. He seemed really nervous though and he wanted the money up front. Down here in the Big Easy they take this voodoo stuff pretty seriously. I've never been too superstitious myself. Although, I was bringing my "Little Devil" along because it seemed an appropriate lure for this little venture.

Let me tell you, I wasn't disappointed.After a few hours of slogging through some pretty fetid swamps, dodging gators, swatting flies, we found ourselves in a dark corner of nowhere. The place was eerily quiet and the air was still as we topped a small rise in the swamp and came across this: 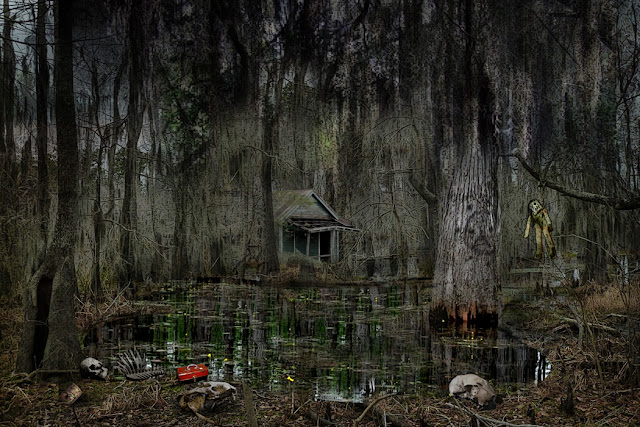 My skin was crawling and my heart was beating like a hammer but somehow I went into "auto-pilot" and, in a wink my lure was in the drink! 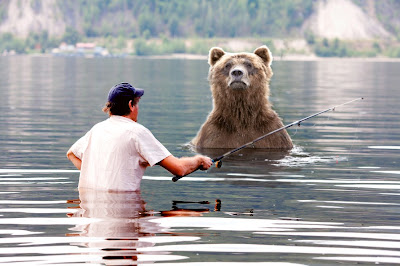 BANG! Did it hit hard! I yanked on my pole with all my might, but it was like a lead manatee had sat on my lure so I pulled harder. All of the sudden the thing leaps from the water an hits Stewie right in the chest knocking him on his ass. Powell is snapping photos like a madman and Stewie is screaming "Get it OFF!!! Get it OFFFF!!!!!" when the horrid thing flops on the ground twice, looses itself from my lure and pops into the pond. A crow cackled at us from a branch and flew away.

We got Stewie under control and calmed him down but the poor guy was pretty shook up. He was babbling about voodoo curses and mumbling to himself as we made our way out of there back towards Pontchartrain. I kept telling him he'd be fine, that voodoo was a nonsense but he was having none of it and, the tell you the truth, I was feeling a bit creeped myself. But I kept at him and he started to come around and by the time the swamp started slipping away and the light of day began to appear he was looking pretty good.

Stopping for lunch, we sat on the banks of Lake Ponchartrain and, after a beer or two we had our tackle out and were laughing and fishing like nothing had happened. Powell was taking photos and Stewie was actually in great spirits. He was wading into the waters and casting when...out of nowhere, this huge bear rises out of the water like a ghost and devours him, Whole, then sinks back beneath the depths as if he (or Stewie) had never been there.

Powell and I stood up, grabbed our gear and walked back to the truck without saying a word. When we got back to town, I headed back to the ship and Powell found the nearest Catholic church. I don't think I'll mess with that voodoo stuff anymore.

That night, Powell drew this as if he was in a trance. You can buy this one on a shirt also, in memory of Stewie.