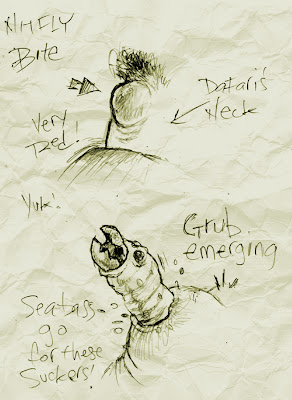 Attaway ran Dafari, Powell and myself to a new landing at Konambi Beach and we set off from there, leaving Attaway behind with the skiff and a bottle of cheap vodka. Dafari came along to help us cut brush although he's been a bit of a whiner lately, having been bitten by a Yellow-Backed Nitfly. It's not the bite that hurts so much but the egg it leaves behind under your skin that eventually hatches into a adolescent grub before burrowing back out. I've had worse. We told him to quit the crybaby business and get on with life. It shouldn't be long anyway, the thing looks like a golf ball on the back of his neck. I'm looking forward to catching it when it emerges; Sea Bass go crazy for these grubs and I plan on doing some serious fishing when we're done here.

Anyway, the jungle here was thinner and progress was much easier. No rain, too. In a couple of hours we'd come across a forest glade that was a perfect spot to sit and wait for our Molokanesian Spotted Dragon friend to show up. We found a rock at the edge of the jungle and sat back for a lunch of tuna sandwiches that Cookie threw together for us. Dafari and I had just polished ours off (Powell was too busy spacing out with his sketchbook) when Dafari starts screaming like a stuck pig and runs across the glade like a maniac. Powell and I ran after him wondering what the hell was going on and caught up to him after he'd tripped over a stump and hit his head on a rock, knocking him out and (thankfully) shutting him up. Well, I guess our little grub was having his birthday on the back of Dafari's neck. No wonder he was screaming, it looked like it really smarted. Good thing Dafari was out like a light. I grabbed the grub and put it in my vest pocket for later. 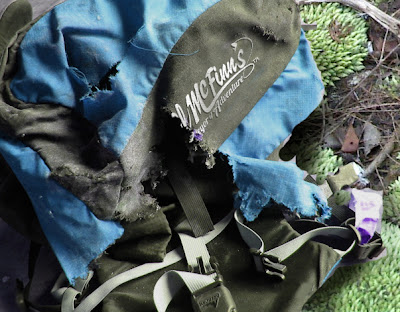 That's when we heard the ruckus back at our picnic spot and, turning around to look there he was: a Big Ol' Molokanesian Spotted Dragon Lizard chomping on Powell's backpack! Leaving Dafari behind, we slowly crept towards the giant reptile who, apparently was completely oblivious to nothing but what he wanted in that backpack: Powell's sandwich. Who knew the secret to luring this phantom from the shadows was so simple? I mean, maybe it was the mayonnaise (Cookie makes his own...I don't want to know how) but other than that, it was straight-on tuna on white. Oh well. We got a good look at him, that's for sure. Powell snapped a bunch of photos before he finally took to the trees.

Now, we're back on board having schlepped Dafari back to the beach and a well-lit Attaway. Powell is back in his cabin working on a new drawing and I'm getting set to hook this grub and catch me a Sea Bass for dinner!
Posted by Unknown at 8:18 AM