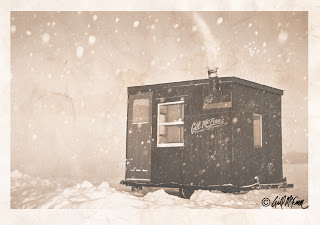 The legend of the Snogfish goes like this: "Many Lake Erie fishermen have found themselves being fished out of the water after their first encounter with the Snogfish. Even those who’ve had a fair warning are unprepared for the ear-piercing scream they are met with when that red head pops out of the water as the Snogfish fights for its life. The experience is truly an unforgettable one. Locals are fond of taking unsuspecting guests fishing in the hopes that the poor sap pulls a “Snogger” and finds himself head over heels in the drink. A lesser-known behavior of the Snogfish is its habit of moaning below the ice during winter nights. On the cold, frozen shores of Lake Erie one can hear a plaintive wail emanating from the depths across the inky-black, frozen lake. The effect is…eerie." 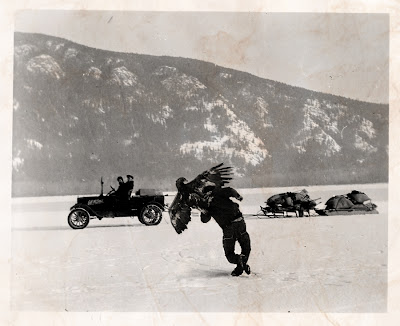 An interesting tale for sure but what it doesn't tell you is the hard work that went into the first discovery of the fish. It was the coldest winter in record when my grandfather and his crew set out across the frozen lake. His old fishing pal "Pirate Pete" was along for the trip along with Mike "The Hammer" Harmon with his tools and building equipment. The plan was to set out and drill a hole in the ice, set a microphone into the water and try to determine the location of the moaning denizens of the deep. What they didn't know was that the Golden Eagles of Erie were nesting in that area and were on the lookout for intruders. Poor Pete found that out at a whiz-stop about a half an hour into the trip (apparently this was sort of an issue with Pete in his advanced age..there were many, many "whiz-stops" whatever the trip) and he was brutally attacked when zipping up his "barn door "  before his "horsey" got back in. I don't know what hurt more, the eagles talons of that zipper lock  on Pete's pecker .


But, it was too late to stop now, Pete beat that thing off and they put the jalopy in high gear and got out of there. By that afternoon they were out of the eagle's territory and intently listening to the deep waters and the Snoggers below. By early evening Mike had the hut up over the hole in the ice, the wood stove was stocked and they were sending their lines down  and having a couple of cold beers. 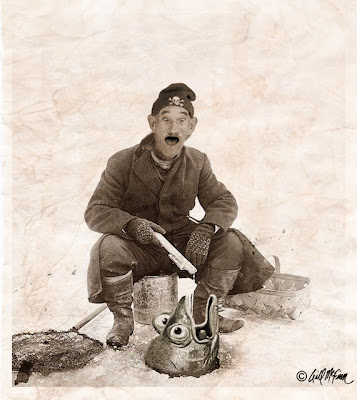 The problem was, old Pete couldn't take the heat. The warmth of the cabin was causing a swelling in his wounded  wiener and before long he was wailing as loud as the  damned Snogfish.  The poor guy eventually opted for a seat in the cold,  dangled his dingus in bucket of cold water. drilled himself a hole  in the ice and settled down to try his hand at the line. He had a bottle of brandy to warm him and Gill and Mike made regular trips out to check on the poor old guy with a hot cup of coffee.  Pete was miserable and it was the longest night he'd had in a long time and that's saying a lot considering he hadn't had a good nights sleep in the past 50 years.  He was just too damned ugly to sleep.

Well, isn't that just how luck works? One day, you could be the unluckiest son of a bitch on the planet and the next day, you're the golden boy. At about   8 the next morning Gill and Mike were blown out of their galoshes with a racket that shook the shed. Outside, Pete had landed a snogfish and it was screaming like a damned freight train..and so was Pete! I don't know who was louder but I know one thing, I'll bet Pete forgot all about his poor peter when he pulled that snogger out of the snow!
Posted by Unknown at 9:55 AM