Well Dave "Poopypants" Hansen managed to tick Mom off pretty well this weekend. I guess she'd stashed some cans of smoked oysters and a couple cigars back in the galley and he got into them. He smoked one of her cigars and fed the oysters to his cat. Nobody'll touch those nasty, canned boogers but Mom herself. I guess Dave figured the cat would go for them. God knows there's enough seafood on this crate to make a cat so fat it'd make a good sideshow attraction but that's Dave... always thinking. When Mom found out her stogie and oysters were missing, she raised holy hell and dragged us all on deck where she started into drilling us pretty good. She learned some nasty trick from the Japanese back in WWII where you pull up your pants legs and kneel on uncooked rice until you start to talk. It's very uncomfortable to say the least after an hour or two and thank god Dave finally cracked. 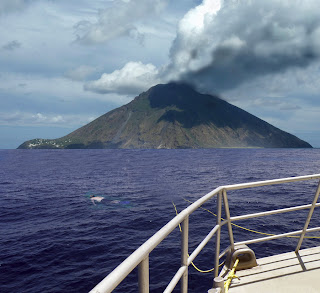 We were anchored off of the island volcano Pangatutu and had been enjoying the sun and sea until this all hit the fan. After the interrogation, I went back to trying to hook me a Patagonian Hornfish with my old Little Devil and was having no luck (funny...I never do with that damned lure) and the rest of the crew were licking their wounds as Mom chewed Dave two new bung-holes and made him swear up and down that he'd make up for the snagged stogie somehow (we were trying hard to avert our eyes, it hurts to see a grown man cry like that). I was wondering what he'd come up with. I knew it wasn't going to be good.

In a half an hour I heard a splash and saw that Dave and one of his brothers were in the drink, snorkeling around for something. 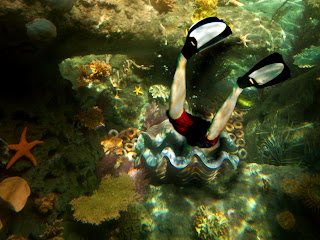 The water here is gorgeous and crystal clear, not too deep and full of all sorts of who-knows-what. Great place to dive and snorkel. You never know what lurks below: treasure or terror...or both! Apparently Dave found the "both" option as he noticed a gleam from down below. Taking a deep breath, down he went and sure enough, there was the biggest damned pearl he'd ever seen, resting on the fat tongue of a giant clam, opened up and blowing sand. Down Dave dived and damned if he didn't almost die. As soon as he'd grabbed that thing, the clam snapped shut, tighter than tupperware! Dave's brother, thinking quickly (as all Hansen's do) stayed above and snapped photos.

Let me tell you, sometimes a curse can be a blessing. Old "Poopypants" must have tasted like, well...crap. That clam spit him out faster than a vegetarian eating a hot dog ! Good thing he had a death-grip on that pearl. She's a beauty.... and I guess "Poopypants" is off the sh*t list for now! 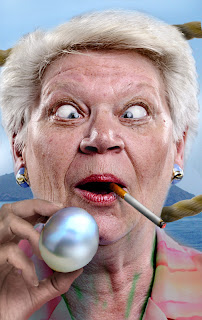