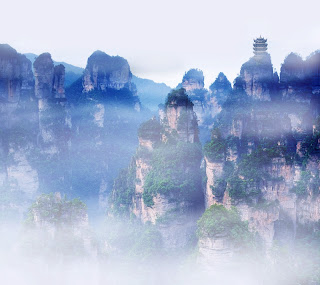 Last week we received the some big news. Someone had reported spotting a Red-Whiskered Ridgeback Catfish in a far-off location deep within China! Now, if you're familiar with the story of this fish, there's only supposed to be ONE in existence. As a matter of fact, my Grandfather, the great Gill McFinn (the first) passed away beside the pond that was home to this most holy of fish. Needless to say, we were excited! Being excited and getting your butt from wherever you are to the depths of China is one thing. We net off anyway.

During customs we were met by a surly Agent who had no love for Westerners and things were looking grim. Officer Wahh was a mean son-of-a-gun and it looked like this might be the end until Veronica opened her jacket and smiled at the stern fellow, blinking those eyes of hers. It takes a heart of steel to resist Veronica when she puts the spell on you. So, in nothing flat, we're back on the trail!

Our guide took us the the great mountains of Lower Foobang Province and deep into the hill country in search of the Shang-bah Monastery. Reports had said that the monks there had the fish within their walls and had been worshipping it since the early 1800's unbeknownst to anyone. They were feeding it blessed rice and pouring wine into it's pond for years and years, keeping the thing happy. These fish are otherworldly..almost alien, spirit-like. We spotted the monastery high upon a hill and my heart leapt! 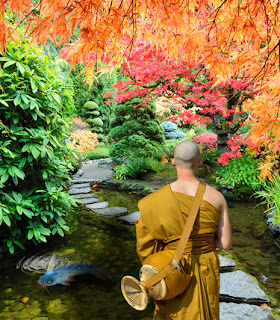 Climbing these hills was rugged. We typically sent Runt scrambling ahead like some crazed hairless ape and had him lift us by rope to each ledge. He never tires, that little booger! In a day and a half we were knocking at the gates of the place, exhausted but excited. I had to rap Runt on the noggin a few times to get it into his head to behave among the holy men inside. We put Veronica in a cloaked hood so we didn't cause any "trouble" ..these guys haven't seen a dame in a loooong time! They greeted us warmly and let us in, guiding us to the magical pond.

Damned..er...Darned if the reports weren't correct. There the thing was, gliding through the water with an unearthly glow surrounding it. A sense of peace came over all of us.

It was magical. As we were snapping photos, one of the monks relayed a story to us about there being TWO fish originally but a misguided monk had lost control and caught and eaten the other fish long ago. Legend has it that he said it tasted something like chicken as he chewed on the fish and then he slowly began to glow brighter and brighter until he vanished in a flash of light. Nobody messes with that stuff anymore. These guys are serious about their catfish!