Off the Grid and Back Again

Sorry for the break in communications folks. Things got a little hairy last week as we flew to Lower Nouhidhannaka after hearing reports of a possible Fathom Lurker appearing in someone's net. False alarm unfortunately. Another "unfortunate" occurrence was the disappearance of one of the Hansen brothers from a local watering hole. We figured it might be some local pirates looking for a quick score with some ransom money but (after a week of searching, asking locals etc) we found the troublemaker shacked up with some 300 lb broad in a back-alley tenement. Apparently many of the locals had heard some strange noises during the evenings and we were able to triangulate the reports to locate the correct apartment. It wasn't a pretty sight and we've got the kid in some regular therapy sessions back on the mainland in Florida. We haven't had the heart to tell him that "he" was a "she" yet and may just keep that under our hats forever. 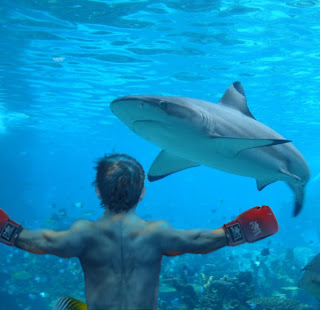 On the sunnier side of things, we learned of yet another "talent" that our little Runt had been hiding from us. In all my years on all the seas I've never seen anything quite like it. So, when he was just a sprout, I guess his old man took him to the Gulf a few times where our little runt would entertain himself by taking pokes at the local sea life while diving off his dad's fishing boat. By "pokes" I mean to say he'd punch the little fishies in the nose. I guess things escalated as he looked for tougher foes and in some time Runt's little sport of "Shark Boxing" was born.

Needless to say, I didn't believe a word of it. Shark Boxing? Ridiculous. Well, shiver me timbers if I ain't a fool. We set off the next day into the Atlantic near Key West and our rascal Runt showed us a thing our two. He'd shovel some chum in some fairly shallow waters, strap on a pair of gloves and in he'd go.

In nothing flat, he was batting the beasts left and right. I've always heard that a shark hates a right to the schnozola but I had no idea what a bunch of girly-sharks they were when faced with the pugilistic prowess of our tiny titan. 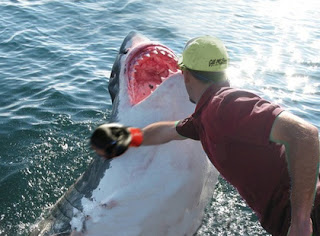 Before we knew it, the two remaining Hansen brothers wanted to get in on the action and Runt was showing them some moves. Good sense prevailed (on my part) though and I told the boys they could take some shots but it'd have to be from the deck. I'd already lost one of these characters to foolishness in the past week and couldn't afford to lose another. Who'd take the trash out?

Here's a nice shot of Dave landing one right on the kisser of a real beauty!