Petrus made a trip to the gulf the other day with Dafari and damned if that Golden Q-Tip didn't score big! As the evening approached he landed something big... a real fighter. Dafari said it "was as if a hundred camels had grabbed hold of his line and pulled toward the great canyon of Alfafa!". I guess that means "real hard-like". Anyway, Petrus held tight and worked that pole for a good three hours before the thing on the end showed it's ugly mug. A Thugfish! That's some real East-Texas Red Good Eatin' when it gets into Cookie's hands. The boys quickly threw the thing on ice once they'd capped it twice in the noggin with a .45 It's not easy to take one of these boys out. They didn't get the name Thugfish for nothing. 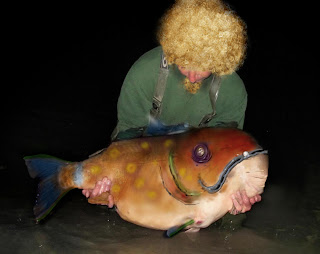 Take one good-sized Thugfish and scale it. (Whack it on its head with a hammer before you try this, you don't want the thing waking up). You'll need to use a machete for this as the scales are rather tough, once you get to hacking at it from the right angle, things should go pretty smoothly for you.

Now, using a chainsaw, cut the tail off 3 inches up from it's flare. Hit the thing over the head with a hammer once again (just to make sure) . Now stab it through its ugly heart with a heavy dagger.

Lay the beast on it's back and, using a skillsaw, split its belly from stem to stern (wear goggles, the blood will leave burns on your bare skin) and reach into its body and scoop its stinking innards to the floor. Please make sure there are no dogs or cats around if you're fond of them (Poor little Petey...he was a good dog). Open a window.

Now, chisel out the cheekmeat using a cold-hardened steel implement and set these aside. Grabbing a huge cleaver, come at the thing from a run from one end of the galley and lay into its head, just behind the gills with all you've got. If you sever the thing in one shot, you're lucky. Go have a smoke.

Have a stiff drink before this next step. Stand the carcass up on its split belly and climb up on the table with it. Now, straddling the thing like a small horse (or whatever you're into), force your hands down on its spine like your some sort of psychopathic chiropractor, breaking its back and flattening the thing out. You should hear a loud snap and some gas escaping from it's blow valve under the tail. Hold your nose..

Now...get some good Manatee fat, the real rich kind, and put about a half cup in a heavy pan large enough for this monster and heat it until it's smoking. Lay your thugfish down and listen to it crackle. Turn it when its browned and brown the other side. Place the reserved cheeks on top. While it's browning, have another drink and find your East Indian Octopus Ink in the back of the fridge. You'll need a quarter cup of that along with some port wine and some finely sliced sea cucumbers, a clove of garlic, minced and some salt and pepper to taste.

Pour this mixture over the Thugfish and cover. Simmer for 15 hours and serve with mashed Tongu Roots and red wine (lots of it).
Posted by Unknown at 5:53 AM