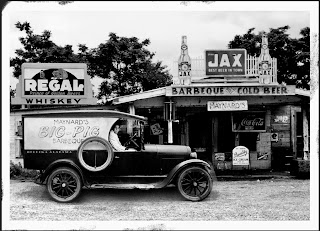 My Grandfather, the great Professor McFinn amassed a great collection of lures (among other artifacts) and one of the rarest examples he collected was a Japanese knock-off of the legendary Maynard's Pork Plugg. Now, the original Pork Plugg can still be found here and there but in the late 40's a few "bootlegs" appeared on the scene for a brief period (no pun intended: actually the Plugg is wearing boxers in my opinion!) originating from somewhere in Occupied Japan. You see, back then the stuff that came from Japan was mostly junk. This was before the transistor and all of that technology that the Japanese would develop like madmen while rebuilding their country and economy after the Second World War had taken it's toll. Stuff that was labeled "Made in Japan" was usually laughed at and tossed into the trash-heap. So, the Pork Pluggs that came out of Japan during period ended up at the dump for the most part. This is why the little boogers are so rare! You can spot one right off, the eyes have faded to a dull yellow and more than likely the ears and tail have fallen off or snapped.

Another reason for the rarity of these things was the way lure companies in those days treated their designs. They were Top Secret and guarded like national secrets. So, when the GoodLuck Lure Mfg. company got wind of the rip-off lures, they were P.O'ed in a big way. Agents from the company were sent to Japan and in a few days "Poof!" the bootleggers had disappeared into never-neverland. I shudder to think what happened to those guys.The fact is, Maynard's Pork Plugg was one of GoodLuck's top lures and it also had a special place in the heart of the company. You see, it was named after a good friend of the company: Maynard Jernigan. 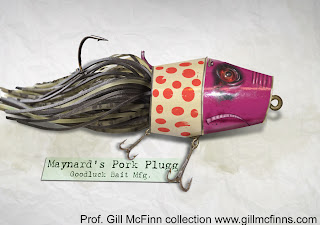 The story goes like this: "In the early days of the Goodluck Bait Mfg. Company in Opelika Alabama, Maynard's Big Pig Barbeque stand was the favorite lunch place among the workers. Its owner, Maynard Jernigan was a local character who loved to fish and liked to suggest ideas for lures to the craftsmen (mostly bad ones). In honor of their favorite restaurateur, the folks at Goodluck created the Pork Plugg. A shallow diving lure with a plastic hula skirt and articulated ears, the Pork Plugg was an effective lure for its time. The back end of the lure was inspired by Maynard's ever-visible underwear and the eyes were said to resemble Maynard's after a long day on the lake."

So, I guess the moral of this story is "Don't mess with GoodLuck" and also "Keep your eyes peeled for a Japanese Pork Plugg...find one and you'll be rich!"