The End of an Era

One of life's mysteries has been revealed today, leaving the land of legend to beasts such as Sasquatch, The Jersey Devil and The Abominable Snowman. It's very exciting and a little sad as well if you ask me. You see, I'm intimately connected to this legend. The story goes like this:

"In 1927 in an area of the South China Sea known as the “Santiago Hole”, researchers in a diving bell were struck by something large and aggressive at a depth of approximately 110 fathoms. When the bell was raised to the surface, the ships crew stared in wonder at the oddly shaped dent left in the crafts hull. And so, the legend of the Fathom Lurker was born. By the mid-1930s Professor McFinn had collected various accounts and descriptions of this deep-sea demon from a number of Pilipino pearl divers and used these to create this portrait, now considered the closest representation of the creature."

So, for years we've "sort of" known he was out there. I mean, how many drunken pearl divers do you take seriously? I remember hanging out in a bar in Olongapo one sweltering summer listening to the pearl divers tell stories of giant clams, monstrous squid and, from one particularly strange dude, a giant, pink scuba diving bear. We were hitting the San Miguels pretty hard and the stories were great but you had to take them with a grain of sea salt. That's why I've often wondered how accurate the description of the Pickle-Tongued Fathom Lurker was, how well did my grandfather research it?

Last week, the deep-sea craft, "Dave" was scouring the bottom of the Santiago Hole in search of shipwrecks and whatever else they could find (and sell). The owner of Dave, Bob Saville is an acquaintance of mine who, in addition to being a greedy son of a bitch also has a good, healthy curiosity when it comes to critters of the sea. He'd heard the story of the Pickle-Tongued Fathom Lurker (of course) and he'd also heard rumors that it was often spotted (allegedly...by those drunken pearl divers again) with a scallop in it's mouth. So Bob had created a sort of a scallop sandwich for the trip and he hoped to try to lure the lurker in.

As you can see in this photo, it worked. 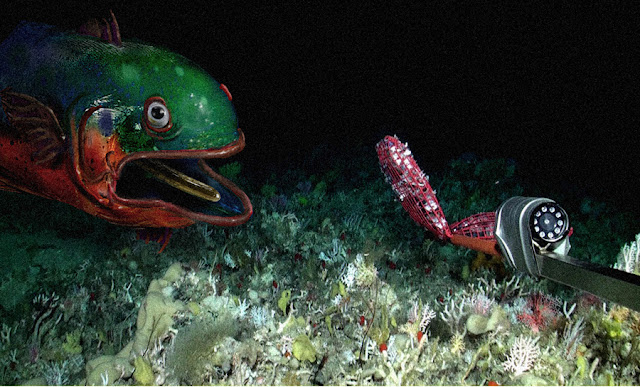 Unfortunately, this is the only photo that Bob got. Apparently Fathom Lurkers aren't to keen on bright lights when the flash went off, the monster disappeared immediately. What happened next, Bob described to me as "Sitting in a steel Piñata at a Mexican baseball bat factory". The lurker attacked with such a vengeance that they had to yank Bob to the surface faster than you can say "I just pooped on the poopdeck" and as they raised the thing out of the water, the crew saw that old Dave's surface was dented like a damned golf ball!

Anyway, he got the photo and I guess that's good enough. I hope he finds himself some sunken Spanish doubloons soon so he can get some Bondo and patch Dave up. In the meantime, I'm glad to see that the old man was right once again. Bravo, Pops!
Posted by Unknown at 1:59 PM